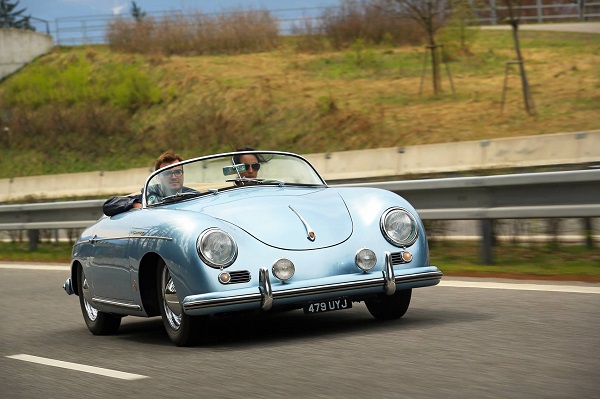 LAfter the first Auctomobile auction week, we decided to pick also two of our auction into a Battle against other auction houses. The first battle takes together two same model years of the Porsche 356 Pre-A Speedster.

Both cars were sold on the European continent. The first was a “triple black” car sold on the 11th of June in the European Online Only Sale by RM Sotheby’s. The final result was 357.500 EUR including premium. (auction link)

The second car was in our first our auction on the 26th of June. The car has undergone two comprehensive restorations with a 100 out of 100 score at a Concours d’Elengance. This example was finally finished in a stunning period correct color of Aquamarine metallic and offered two engines, it currently runs with a 95 hp 1964 356 SC 1.600 ccm engine with the 55 hp 1955 356 Pre-A 1.500 ccm engine included in the sale. The final result was this time 332.000 EUR including premium. (auction link) 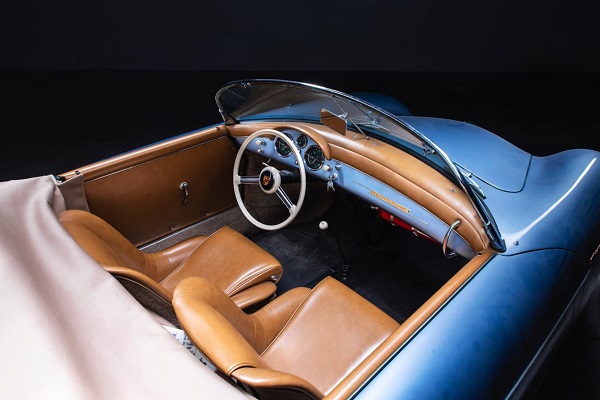 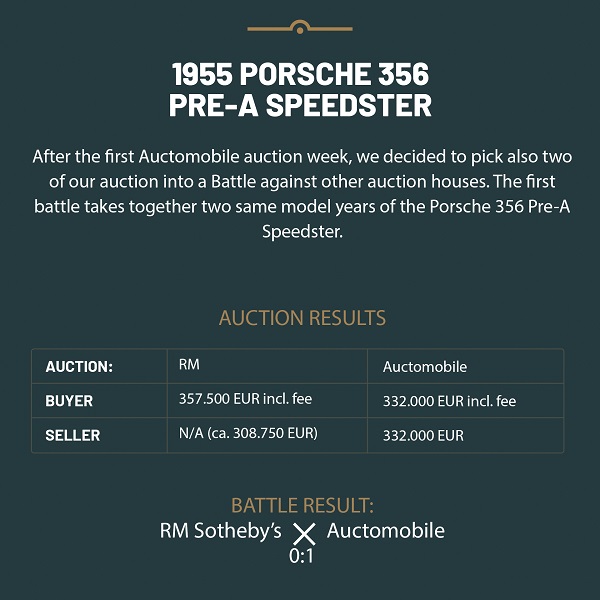 At the first look it looks, that a better result was achieved by RM Sotheby’s. But if you look deeper into the numbers, nobody gained from this result so much as RM Sotheby’s. The new buyer had to pay much more (+4.500 EUR VAT from the premium).

But the seller received even much less than the seller in our auction. This was the reason, why the seller agreed on the sale with us. He offered the car to RM Sotheby’s prior to us. But he knew, that the buyer will have to pay 15 % and he has to pay another 5 % more, what RM Sotheby’s offered him with a very low reserve of only 200.000 EUR, that could in the worst case scenario leave him with only 190.000 EUR.

So the car was offered to us, if we invest a lot into the marketing to present the car to the world and we take no commissions, if we do it only for our own presentation. We agreed in case of a no reserve auction to gain a lot of interests. And so the final results present this strategy was the winner. Although the car sold for less than the one at RM Sotheby’s, the seller received 332.000 EUR, but even if it would be sold at RM Sotheby’s for 357.500 EUR, the seller would receive in that case (given the conditions offered to seller by RM Sotheby’s) only 308.750 EUR.

This fact makes our first ever auction a winner in this Battle.